At one point in the evening we read a list of the names of the families who had owned the Farmstead over the years.  The only name that got a reaction was "Moore".  The audio recorded what sounds like two faint knocks after the name was read, although we don't recall hearing the knocks at the time.

In the attic, after meeting Jonathan, we used a "Ghost Box", which continuously scans through radio frequencies, to try to communicate.  When we asked their name there's a response of "Jonathan", but we missed it.  A few minutes later we hear "Jonathan" again, more loudly, and this time we hear it.

In the second floor room where we encountered the man in the top hat, we played period music to try to trigger an emotional reaction, and that we did.  Spirits often want to show Kristi how they passed, or even make her experience what they did when they passed.  It's typically not pleasant, to say the least.

We thinks that's likely what happened just after we started playing the music, as Kristi was suddenly overcome with coughing and throat pain.  Here's a recording of her experience:

There's something odd in that recording - did you catch it?  About 30 seconds in we stop the trigger music, but there's a small quiet rift of a different music for a moment - almost like a xylophone.  Oddly, we had left a xylophone in the attic just above the room we were in, in case anyone wanted to play it.  There were no signs that the xylophone had been touched, though.

This final clip is a bit longer, and not included as evidence but to share our experience in crossing the woman in the basement and her young daughter.  Read more about their story below.

Here's a summary of the spirits our medium, Kristi, encountered during our visit, and some of the things she was able to pick up about them.

We encountered Jonathan in the attic. Jonathan was a soldier in the Revolutionary war, but we don't believe he died in battle.  "Damned Redcoats", Kristi heard.  He gave 1820 as a date that was important to him, although didn't share why.

Kristi felt the attic was important to the Revolutionary War - did family house soldiers?  Wounded Soldiers?  He talked about his big feet.  He walked with a slight drag to the left foot (were the shoes he had to wear during the war too small?)

Kristi also sensed a woman Spirit in the attic with Jonathan.  She stayed in the background and didn't step forward to interact - possibly residual.

THE WOMAN IN BLUE

Kristi saw the Woman in blue on the first floor, rushing past us as we were in the room to the right of the foyer. She was preparing for a big dinner, setting the table.  She wasn't a servant, but not a member of one of the home's owning families either - more of a caretaker of some sort.

Her hair was clipped back with braids and then in a tight bun. She wore a baby blue dress with three-quarter sleeves and lace around the bodice and down to the cinched waistline and black boots.

She didn't interact with Kristi at all - she just went about her business, which may indicate she's simply a residual energy.

THE MAN IN THE TOP HAT

On the second floor, in the room with the fireplace flanked to the right by the attic stairs and the left by a small closet, Kristi encountered a stocky man, about 5'7"bearded man in a top hat smoking a cigar.

He was very drawn to the closet, especially the top of it, giving the impression that something had been hidden there - something very important.

As opposed to the Woman in Blue , this man had a very strong presence.  He's an active spirit who is likely to be spotted on occasion, although he didn't engage with us very much.

In the same 2nd floor room we encountered a little girl, maybe 8 or 10, whose name began with an "S" - possibly Sandra or Sarah. She was from the same time period as the Woman in Blue, although we don't know if they were related.  She died of an illness like pneumonia or flu.

She interacted with us a bit during a pendulum session, and loved when we blew bubbles for her, but shortly got bored and ran off to play.

Kristi also sensed a little boy Spirit in the room at one point- but didn't get details. He's possibly residual.

THE MOTHER AND DAUGHTER IN THE BASEMENT

When we first did a walk through of the basement, early in the evening, in the back by the old fireplace and outside entrance Kristi encountered a young girl saying "Come on, Mommy, come back and play with me!"

When we returned to the basement later in the evening the rest of her sadstory emerged, centered on what was likely some sort of storage dugout area.  From the outside of the Farmstead this area is to the left of the door, at the far end of the home, jutting out from the home (but underground).

There had been some sort of significant illness in the area - possibly Yellow Fever. A church nearby had been used as a staging area for the sick, and Kristi saw an image of bodies stacked in the basement storage area. Th feeling of it all was a mix of fear, dread, and sadness.

Then she saw how this was all connected to the little girls she'd encountered previously. A family had come off a boat and was traveling through the area, long ago - a father, mother and daughter, and a baby boy the mother was carrying in her belly.

The home's owners were hospitable to the family and allowed them to stay for a bit, but the sadly the sickness inflicted them and the mother and daughter didn't survive. Their bodies were temporarily stored in the cubby with others of the same fate, as was often done to keep the dead cold until they could be buried in the spring.

The mother was red-headed, possibly Irish as she spoke with an accent. Her last name was something along the lines of "McGwin", and she was called "Teddy", possibly short for Theodora.  Her daughter's name, she shared, was Rosie.

At one point when Kristi was asking questions she heard "Okay", which we later learned was a name associated with the history of the home.

Teddy had remained after death searching for her unborn baby, and her daughter remained with her as well.  We were able to cross over both mother and daughter together that night, and reunite them with the husband/father and the baby boy on the other side.  The recording of this reunion is included above. 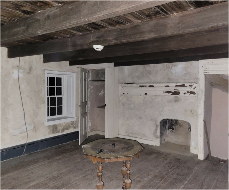 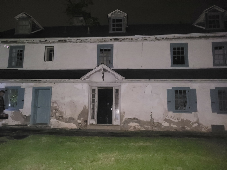 PCINJ was honored to be invited to investigate the amazing and historical Farmstead in Hatboro, PA in October, 2022. Learn more about this wonderful location here:  https://www.farmsteadalliance.org/about

Here’s a summary of the spirits our medium, Kristi, encountered during our visit, and some of the things she was able to pick up about them.  Have a story about the Farmstead?  We’d love to hear it!  Write joanne@pcinj.org