Check back soon for more of our best EVPs!

From the investigation of a mid-1800s home in NJ:

This EVP was recorded during the Prelim of our second investigation.  As we talk to a client about a story we had heard the last time, an unknown male voice calls for “Tifany”.

Philip with a French accent?

As we were leaving the Prelim for the second investigation, Joanne was on the front porch saying goodbye.  She felt something out there, just as she had on the way in.  At 5 seconds you hear a car go by and just after that there's a weird sound - almost like a high-pitched and fast "phil-eep".

Recorded during the second investigation, listen for s soft “being followed”, more typical of most EVPS, followed by a loud male “Yo” over the investigator, Mike.

As we were on break I went to change the batteries on my Spectorcam.  It was in a room where an apparition was sighted the night before, a disembodied breath was heard during setup, and an investigator felt cobwebs on his head when there were none around.  As Joanne enters the room she begins speaking to the spirit.  The male voice saying “yes” was not from anyone physically present.

As the investigators go up to the 3rd floor for the final segment of our investigation, Mike takes one too many steps and trips.  As he jokes about it we hear a child’s voice cut in saying “Bye Bye”.  Maybe as in “Bye-bye, have a nice trip?” Who knows...

From an investigation in Cedar Run, NJ:

A spirit child was captured on an earlier investigation saying “I like you”.  On a return visit, the same voice is heard asking for help.

In this audio you’ll hear Joanne tag the movement of the team as they leave the basement, then another investigator do the same.  You’ll hear their footsteps, and someone giggling upstairs.  The “help”, however, was verified not to have come from any of the living.

This is more typical of  EVPs caught on investigations - it’s best heard with headphones. The team had just finished up a session in the living room, and Joanne and Pat were thanking the spirits before moving to the next location. After Pat says “All right”, listen for a soft voice say “Who was that?”

From an undisclosed client residence:

This was captured during setup for an investigation.  The clients had left for the evening, and the only occupants were Joanne, Mike, and the dogs.

Joanne and Mike’s conversation is clear, but the little girl’s voice at the end wasn’t present at the time.  The residents had told their spirit that some new friends were coming to talk to it that evening, and the voice may be saying something along the lines of “I’ve got new friends”, but that’s open for interpretation.  See what you think... 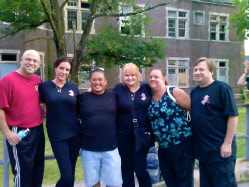